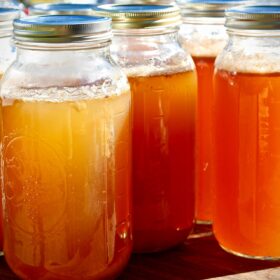 Apple cider vinegar is made using a process called fermentation. Basically, they take delicious smelling apple juice and turn into “Eeewwwwaaa, what’s that smell?” The addition of yeast mixed with the sugars from the fruit turns to alcohol. Bacteria comes in and turns the alcohol into… drumrolllll… apple cider vinegar. However, that stink has some incredible benefits. Below we will explore the vast benefits of apple cider vinegar and how to use it: from ingesting it to put it on your scalp. We promise the benefits outweigh the stink.

Modern research is a little spotty when it comes to the benefits of ACV, however, it has been used for centuries. We are just now getting into the huge variety of benefits that have been found over the past few years. Web MD says, “Some studies have found that acetic acid — which gives vinegar its distinctive taste and smell — may help with a variety of conditions:

Vinegar also has chemicals known as polyphenols. They’re antioxidants that can curb cell damage that can lead to other diseases, such as cancer. But studies on whether vinegar actually lowers your chances of having cancer are mixed.”

The list of health benefits can range from weight loss, reduced cholesterol, lower blood sugar levels and improved symptoms of diabetes. According to Health Line, “The main substance in vinegar, acetic acid, can kill harmful bacteria or prevent them from multiplying. It has a history of use as a disinfectant and natural preservative.” I don’t know about you, but we’re sold. But, what is the best way to use AVC? We got you, keep on reading!

Use of Apple Cider Vinegar:

Weight Loss Drink – As there is a lot of acid in ACV, it is not recommended to drink straight. Adding 1-2 tablespoons to water or tea is prefered when consuming as a beverage. According to the US National Library of Medicine, “A study in 175 people with obesity showed that daily apple cider vinegar consumption led to reduced belly fat and weight loss.

This study was just 3 months long and the only thing they changed was drinking ACV. Think of the changes you could see with proper diet and fitness, as well. It helps with the filling of fullness, leading to less calories consumed.

Flaky Scalp – Not only can ACV be beneficial to the body, it can also be used on the skin, as well. According to Reader’s Digest, “The acidity of apple cider vinegar changes the pH of your scalp, making it harder for yeast to grow. Mix 1/4 cup apple cider vinegar with 1/4 cup water in a spray bottle, and spritz on your scalp. Wrap your head in a towel and let sit for 15 minutes to an hour, then wash your hair as usual. Do this twice a week for best results.” Dr. Oz recommends the same treatment for dandruff, also!

Winter Cold & Flu – The coming season brings out many illnesses from head colds to the put-you-on-your-ass flu. Although, we hope you stay super healthy this winter, keep this ACV tip in your back pocket when your nose is feeling stuffed. ACV is heavy in potassium. Potassium thins mucus. See where we’re going here? Consider mixing a teaspoon to a tablespoon into your water or tea to help with your stuffy nose.

The benefits of apple cider vinegar seem endless, and many uses are unproven. However, the ones that have worked for years… heck, even centuries have stayed tried and true. I bet if you ask your grandparents, they have some additional ways they used it back in their day too! Use the fun and efficient ways above to help with your needs. As always, when using ACV for a medicinal purpose, please consult your doctor before use.

Have you used ACV for a certain benefit? Tell me in the comments!

I help women quit quitting on their health goals and create a realistic & actionable plan. Check out my Blog and YouTube for free wellness resources.

We use cookies to ensure that we give you the best experience on our website. If you continue to use this site we will assume that you are happy with it.Ok